The first time I heard a Mexican patient say, Me duele la paleta, the Peruvian in me was very confused. See, in Peru, a paleta is a small wooden racket, like you use for ping-pong. However, while growing up in Lima, I watched Mexican TV shows, so I was aware – and quite confident – that in Mexico, a paleta is a lollipop or popsicle.

So I was at a loss when a Mexican patient used the word paleta and there was no candy in sight, just a shoulder blade that he had injured at work.

It turns out that he was using one of many colloquial terms I would come to hear from patients. Such terms actually come from the names for animal body parts.

Through my experience as a medical interpreter both in Arizona and California and as an instructor in New Mexico, I have learned about the demographic that we as Spanish-English medical interpreters often serve. The average Spanish-speaking patient’s educational level is at or below fourth grade, and some have lived and worked on farms. As a result, some patients borrow the animal names for body parts without being aware of the other options available to refer to parts of the human body.

As medical interpreters, we need to be aware of these alternative body part names in Spanish in order to convey the correct meaning into English. If the patient says, Me duelen las tripas, we should interpret it as I have a stomachache. This is the meaning the patient is conveying – and rendering it that way will avoid confusion with the provider.

I only recommend using these terms with patients if they use them first, because some may find it offensive to use livestock terms for their anatomy. For example, if a provider asks a patient about a stomachache, I would not ask the patient if his tripas or panza hurt, but rather, if he has a dolor de estómago. I do this to maintain a professional interaction and to use the most neutral and accurate terms possible. And also because a provider once remarked in private that he wasn’t “a veterinarian, but rather, an orthopedic surgeon.”

Here is a list I have compiled that may be useful for interpreters who work in Spanish and English. The definitions give both the colloquial meaning as well as the strict dictionary definition. Enjoy!

I coughed up a lung (a colloquial way in English to indicate a strong coughing spell).

He always has a full belly.

I stand all day long and my calves hurt.

He was grabbed by the neck.

I bend over a lot at work, and it hurts my lower back.

I have a herniated disc [in my spine].

I tripped and fell on my face.

My back hurts after picking avocados.

* People who work in the fields may use the Spanglish term piscar that comes from the English verb to pick.

I had a stomachache and diarrhea.

It should technically be translated as My hooves hurt, but a provider once joked to a friend of mine that he was a doctor, not a veterinarian, so a better rendering is My legs hurt.

I was hit here, in the mandible.

I fell and hit my tailbone.

Si no como a las doce, me suenan las tripas.

If I don’t eat at noon, my stomach starts growling.

The door slammed in my face and hit me on the nose.

The following diagrams show the specific locations of some of these terms that come from livestock. I have marked certain body parts you may hear in medical encounters. 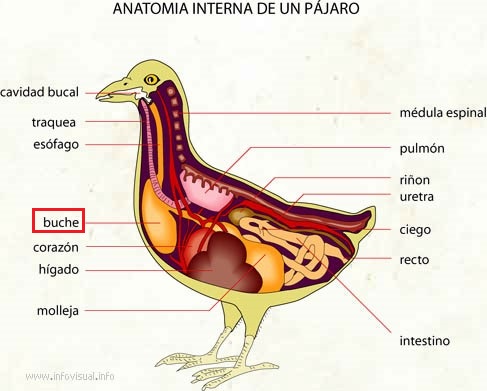 In this image, we see the buche(stomach)
Image courtesy of https://infovisual.info/es/biologia-animal/anatomia. 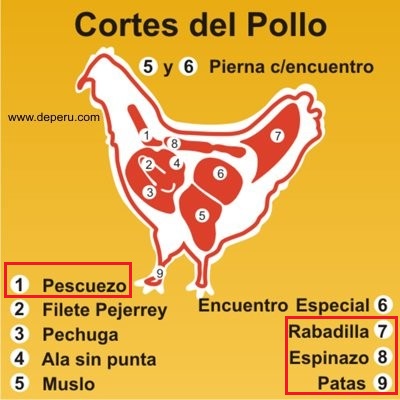 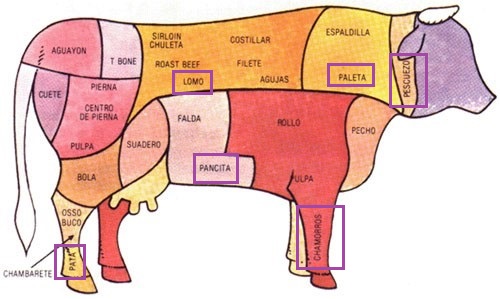